After the end of the relaxation of export concentrates or minerals that have been processed but not yet reached the stage of purification, the Government issued Regulation No. 1 Year 2017 a new effect on January 11, 2017, where mining operations have options such as Special Mining Business License (IUPK). IUPK the application will result in the addition of more taxes including income taxes (income tax), value added tax (VAT), to the land and building tax (PBB). In addition to the terms IUPK, the government still allows PT Freeport Indonesia to export concentrates on condition build smelters within 5 years and divest 51% stake to Indonesia.

It turned out that the regulations issued by the Government of Indonesia responded in less wise and less mature by the Freeport Indonesia with US companies that stopped production and laid off most of its employees since February 10, 2017, including a number of contractors PT Freeport Indonesia also do the layoffs since February 22, 2017. after that, Chief Executive Officer of Freeport-McMoRan, Richard Adkerson ultimatum to the Government of Indonesia to give a deadline of 120 days to resolve the question of contract, and if negotiations continue to fail, then it will sue the US $ 50 billion to Indonesia via the Investor-State Dispute Settlement (ISDS ) or International. Arbitration ultimatum is excluded because until January 25, 2017 there has been no export license issued by the Indonesian government concentrates.

In the ordinary people would say definitely the country is higher than companies that exist in Indonesia, but in this case even though Freeport is higher than the state, proved to be the CEO of Freeport-McMoRan even dare to ultimate Indonesian government.

Many people judge that so far there has been no administrative solution, systematic and holistic undertaken by the government to address issues that have been protracted. If we are honest, the real root of the problem there is the messy Freeport contract of work itself, mining policy administration system vulnerable to corrupt.

Freeport already benefit from the abundant mineral resources in Papua. The advantages have made Freeport the company changed from subsistence, not recognition, the giant mining company in the world in just a short time. However, it should be assumed changes into a giant company is acquired by a variety of fraud, manipulation, allegations of corruption, political pressure and away from the rules of business and business relationships and patterns are commendable and civilized country.

The government should not continue to let this injustice. Therefore, the next step is that the government should be confident to review and correct policies and contents of the contract of work (COW) Freeport. KK with Freeport should be changed in accordance with the mandate of Law No. 4 of 2009 on Mineral and Coal Mining. Freeport Company also threatened to layoffs the aftermath of the native servant does not go the issuance of an export license from the government of Indonesia.

Freeport poised to file a lawsuit against the Government of Indonesia to track international judicial or arbitration. Steps will be taken if not yet found agreement between the Indonesian government and PT Freeport matter of negotiating a contract within 120 days. In the Qur’an say that the earth’s riches and its contents are managed by the state and the benefits intended by the human race so it should be mains water and the other was given to the people rather than for other citizens.

The government should be able to re-capture the nation’s assets, PT Freeport Indonesia; it is our collective duty to oversee the process, because without the youth Indonesia will not run properly.

Country are stronger that Freeport

Meanwhile, Coordinating Minister for maritime, Luhut Binsar Panjaitan said the President Jokowi has prepared a selection of chaotic settlement contract status change of PT Freeport Indonesia, the government still wants foreign investment can go in and not complicated, but the PT Freeport Indonesia must mematuhu rules that apply in Indonesia. 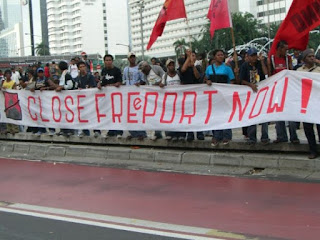 Actually, the problem Freeport based on the problems of the first, the perception of the contents of international contracts. According to Indonesia, there is a provision that PT Freeport Indonesia, which operates in Indonesia should be subject to the laws and regulations of Indonesia. Meanwhile, Freeport Indonesia considered that the international contracts of higher social status than laws and regulations after the date the agreement was signed. In this context, it is clear that the attitude of Freeport is a big one, because international contracts can not preclude the obligation and the authority of the state government to maintain and preserve natural resources for energy security or energy security.

Second, their mastery of the ownership structure of the shares owned by Indonesia which is 51% resulting in control Freeport Indonesia is in Indonesia, and this has become a sensitive subject. However, the brave attitude Jokowi administration in addressing the pros and cons of PT FI urged the 51% divestment shows the government is present in the community in order to protect national interests.

Apart from that, there are challenges for governance including Papua Governor Jokowi to immediately empower and economic welfare of Papua with the programs are labor intensive and the provision of aid or economic incentives. It is important to remove the dependence of the economy of Papua against Freeport.

Mental Revolution To Prevent The Danger of Communism